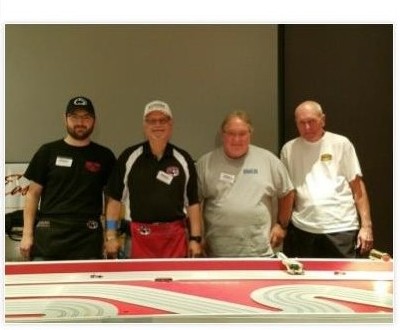 It started off a rather dreary day weather wise but never the less the racers and Slot Car vendors showed up to the Amazing America on Wheels Museum in Allentown PA. If you are ever in this area this is a must stop, the exhibits are always awesome and turn over quite often so each time you there you will see something new. Today ECHORR gathered to run the Eddie Sachs memorial Indy car race as well as the other ECHORR classes. The big question was would Henry Harnish be victorious again, and although there was much talk from some racers before the event about beating Henry, The Champ would once again demonstrate why he is the “Champ”!!

A total of 15 racers showed up for the event, some new faces and some we had not seen in a while. There were vendors upstairs in the Museum selling Slot Car stuff and exhibits galore throughout.

First up was the ECHORR SS class, our fastest cars. As usual on the Red Max, Derek Sheaffer dominated the field, the rest of the field was pretty close to each other but Derek ran away with this one. Good job Derek!

Next up was qualifying for the Eddie Sachs Memorial to determine who would be in the Final 4. After 2 minutes of intense qualifying the A Main was seeded and it was lunch time. There an old-style café in the building and most of us went up there or walked around to enjoy the Museum.
It was now time for the big show. Henry was on a mission and gained at least one lap on the field per segment to take the checkered flag for the fifth year in a row, a record that will probably never be broken…Great job Champ!!

11 racers stayed around to run the Nostalgia Class. This was the closest race of the day and was won by 15 sections.
Overall a great day for Slot Cars with the racing and the show a big success. Thanks to all that participated.

See everyone next race at Randy’s Raceway. See www.echorr.com for details.
Hiram